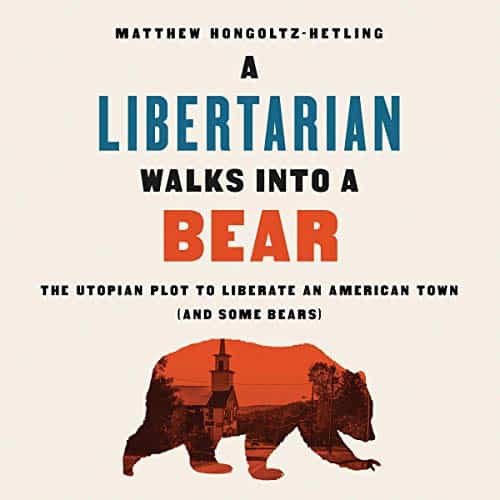 A Libertarian Walks into a Bear

Presentation will be held via ZOOM

Author Matthew Hongoltz-Hetling will talk about his book, A Libertarian Walks into a Bear

Once upon a time, a group of libertarians got together and hatched one of the most ambitious social experiments in modern American history—the so-called Free Town Project: a plan to take over an American town and completely eliminate its government. In 2004, they set their sights on Grafton, NH, a flyspeck town with only one paved road, buried in the woods of New Hampshire’s western fringe.

When freedom-focused libertarians across the US—from as far as California to as near as Massachusetts—descended on Grafton, state and federal laws became meek suggestions. Soon the wilderness-thick town lost public funding for pretty much everything: fire dept, the schoolhouse, library, and perhaps most importantly wildlife services. As the people were ignoring laws and regulations on hunting and food disposal, their newly formed off-the-grid tent city caught the attention of some unruly neighbors: the bears.

Armed with a pen and journalist’s notebook, Matthew Hongoltz-Hetling—a seasoned journalist who has covered everything from Maine’s stately Governor’s Mansion to the mud hut of a witch doctor in Sierra Leone—was drawn to Grafton in hopes of uncovering the truth behind this fantastical tale of bear vs. libertarian. In this book, Hongoltz-Hetling details how this tiny town became a radical social experiment—until the bear attacks started.